Steady increases have contributed to a housing recovery that began earlier this year. And most markets are being affected by foreclosures.

Bank-owned homes typically sell at a sharp discount, weighing down the values of nearby homes. In markets where the supply of bank-owned homes for sale has declined, investors and other buyers will often drive up prices on the few properties that hit the market.

Here are the top five cities that have recorded home price gains over the past year and the five that have posted the steepest declines in the same period:

The combination of fewer foreclosures coming onto the market and investor demand for bank-owned homes has created bidding wars, driving prices higher. But sales of bank-owned homes sank to the lowest level in nearly 4½ years last month.

Sales of foreclosed homes have been rising, growing 33 percent in the first three months of the year. Even so, Minneapolis still has a nearly 20-month supply of foreclosures.

Investors and overseas buyers have been scooping up homes. Sales in June hit the highest level for that month in five years. But the market still has a 20.3-month supply of foreclosures.

Sales in Denver have posted monthly annual increases going back to February. Nearly 21 percent of sales in June were made by buyers that didn’t list the home as their primary residence. That suggests they were investors or people buying second homes.

The Washington metropolitan area, including suburbs in Maryland and Virginia, benefits from a healthy job market, much of it linked to the federal government. Demand for homes is consistently strong, and foreclosure activity in the area slowed in the first half of the year.

The housing market is weighed down by 11 percent unemployment, partly due to heavy reliance on the construction and real estate markets. The market also has about a 12-month supply of unsold homes, which is about twice that of a healthy market.

Prices in New York remain beyond the reach of most buyers. Even homes in foreclosure that are being sold at deep discounts remain high. It takes, on average, nearly three years for a home in the New York area to complete the foreclosure process, which means many potential sales are delayed for years.

Sales have slowed as the inventory of bank-owned homes on the market has declined. High unemployment and a tourism-dependent economy have put off some buyers.

The Chicago area’s unemployment rate fell to 9.4 percent in June from 10.9 percent a year earlier. Sales of foreclosed homes have been climbing. The region’s supply of bank-owned homes is now nearly 19 months.

The housing market in Los Angeles has stabilized during the past year. More homes that are not in some stage of foreclosure have been selling. But the job market has been improving only slowly. So it’s not creating enough demand to move prices higher.

Can you tell how much I want a swimming pool in my backyard?

When looking for a swimming pool contractor don’t go for the low price leader. Check references. Check age of company. Check whether they are part of the Florida Swimming Pool Association.

South Florida is home to some of the most talented pool designers and contractors in the country but we are also home to scam artists that will dig a hole for a hefty deposit and leave you hanging high and dry. Do your homework. Ask your LCRS sales consultant for recommendations. We work with many high caliber individuals in residential and commercial pool construction. 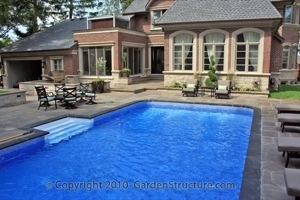 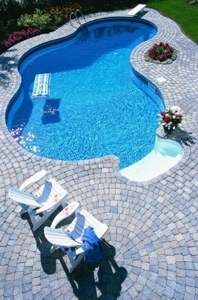 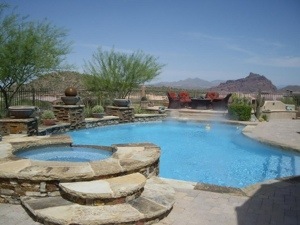 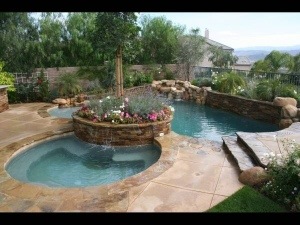 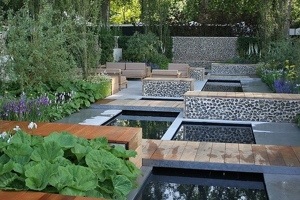 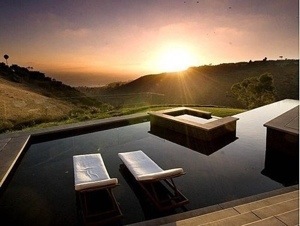 Being cooped up in the house with Tropical Storm Isaac with a 4 year old for 3 days had me thinking about play scapes with natural stone. As mothers of toddlers especially boys know the object is to get them as tired as possible so they will go to sleep at night. My next door neighbor Lauren Hadida helped inspire this post with her pinterest board.

Here are some cool ideas… 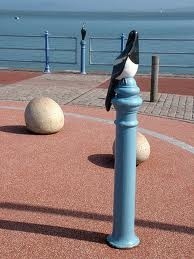 Working at Larry’s Cap Rock for me can kind of be likened to a diabetic working in a candy store. I love do it your self and design ideas.

I am constantly looking for ideas on how to make my home more inviting. So here are just a few … 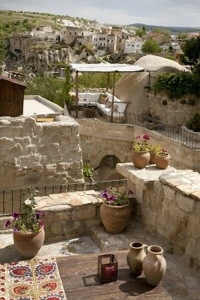 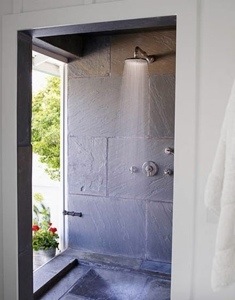 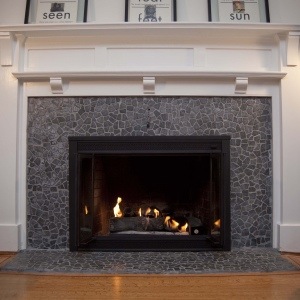 The Baroque is a period of artistic style that used exaggerated motion and clear, easily interpreted detail to produce drama, tension, exuberance, and grandeur in sculpture, painting, architecture, literature, dance, and music. The style started around 1600 in Rome, Italy and spread to most of Europe.[1]

The popularity and success of the Baroque style was encouraged by the Roman Catholic Church, which had decided at the time of the Council of Trent, in response to the Protestant Reformation, that the arts should communicate religious themes in direct and emotional involvement.[2] The aristocracy also saw the dramatic style of Baroque architecture and art as a means of impressing visitors and expressing triumphant power and control. Baroque palaces are built around an entrance of courts, grand staircases and reception rooms of sequentially increasing opulence.

Stepping pads are a beautiful trend in modern landscapes. They turn your pool, staircase, or landscape into a striking statement. Check below for inspiration. 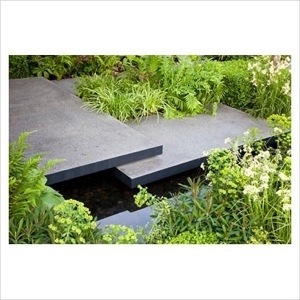 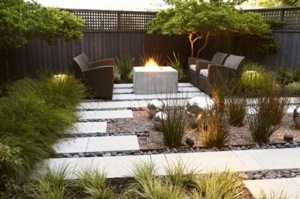 Leave it to those Hoosiers! While we have been trying to escape the heat they have been working on some beautiful new projects nationally with Indiana Limestone. Consider the incredible life cycle cost savings provided by Indiana Limestone & you … Continue reading →

I recently gave a 4 CEU presentation and received feedback from one of the legends in the business Bruce Howard about how to improve the presentation. Bruce’s thoughtful analysis made me really think about how many times marketing and sales staff over think the equation when presenting.

Bruce suggested that future CEU presentations include: specifics, price, how to install, pluses and minuses of each material, seal or not, and maintenance expected, etc.

Simple questions, but not addressed in 3 of the 4 landscape architecture presentations I gave to Bruce and his peers. So today’s spotlight is on Bruce for helping me tailor some of the “canned info” to be more relevant and simple.

What would feature in your dream garden? An orchard full of fruit trees? An expanse of manicured lawn? An oasis of tropical plants? Sadly, with their smaller-than-postage-stamp dimensions, the average urban garden may not be big enough for even a fraction of your grand designs. But that shouldn’t stop us city slickers from creating our very own patches of paradise, right in the middle of the city.

Keeping a gorgeous garden isn’t just a nifty way to impress the neighbours, either. Think of it as another little aspect of life insurance: a bit of blooming peace of mind to guard against boredom, stress-overload and city-blues. There are the physical benefits of all the stretching, bending and lifting, for starters. You’ll also be getting a good dose of fresh air while the whole family will be able to enjoy the top quality nutrition of your organically grown fruits and vegetables. Gardening also has some well-documented psychological benefits and is even offered on the NHS as a way to ward off depression.

Now that you’re convinced, where should you start? Here are our top tips on gardening for city dwellers.

Make a plan
Take a look at the space that you have, no matter how small, and think about how you intend to use it. Do you love entertaining, or will it just be a place for the kids to play? Do you want to grow your own vegetables, or do you prefer the aesthetic benefits of beautiful flowers? Next, you’ll need to look at which areas of your garden get the most rain and sun exposure. Finally, find out what type of soil you have (should you have any). Armed with this information, your next stop will be your local garden centre where staff can help you choose the plants that will suit you best.

No garden? No problem
Having no (or very limited) outdoor space shouldn’t stop you from developing green fingers. Even a tiny balcony or windowsill could make a perfect spot for miniature salad gardens or beautiful flowering plants. Choose an area that gets at least five hours of sun, and don’t forget to water frequently if your plants will be under cover. You don’t even need to shell out on expensive window boxes or containers, either. Now’s your chance to get creative and recycle some of your old junk, such as decorative metal tins or old wellington boots, for example.

Lighten up
Worried that your garden doesn’t get much light? Maximise the rays by placing a small amount of aluminium foil on the wall next to your plants.

Look up
If you really don’t have much space you’ll need to get creative. Vertical gardening allows you to use every inch of your garden, so look out for stackable containers, climbing plants and vegetables that can be trained to grow upwards on canes, like French beans or tomatoes.

Sow what you like to eat
If you’ve kept plenty of things in pots before, only to see them wither and die when you forget to water them, it’s easy to get put off. But don’t be deterred by past mistakes. A great way to keep your enthusiasm levels up is to grow the things you and your family really love to eat. Making a salad of your home-grown lettuce, radishes and tomatoes will give you such a great sense of achievement, you’ll soon be wondering what else you can grow.